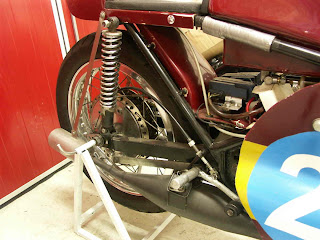 TR 350 Bj. 1972, ex. Kurt Ivan Carlsson Carlsson was 3rd in world championship 1971 and built this for 1972 season. The bike isn´t exactly like it was in 72 when it was painted just like a Yamaha but the red changed to green.

Also there were other wheels on it and a 6 speed gearbox was fitted, now 5 speed and wet clutch 1971 TR2B items in the engine. Frame is made by Carlsson, according to him the bike weighed in at 95 kg in 1972 with the original wheels fitted then. The bike is running and is fast.
The clutch is slipping though.
The Kurt Ivan Carlsson bike has a TR3 engine.

It has matching numbers with the frame 720101 and was bought by the danish yamaha importer. Carlsson tuned it and it was very fast in 72 but lost the edge when the first factory TZ appeared. It can be delivered with Yamaha TD3 frontwheel and fork instead of the Seeley forks and Fontana that are fitted now. Carlsson didn´t have the best season in 1972 but managed to take best a 5th place in the spanish GP on this bike in world championship race 1972. 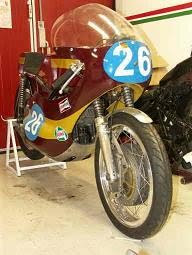